Kristofer Clegg has been interested in engines, machines and things that roar from birth. His American grandfather was a farmer, as was his Swedish father and grandfather. Therefore, his interest in machines is not so surprising and that the career choice later in life would become something with machines was early given.

“I’ve always liked machines of all kinds, but the wheel excavator is a little extra close to my heart. It’s probably my creative side that gets an outlet here, to create something and see the results of the work. But the fact that I was going to be an influencer was more of a coincidence. I’ve always read a lot about machines and followed others who posted pictures. When my employer was going to expand the fleet, I wanted to share it and the new machine – that’s where the journey started six years ago, says Kristofer Clegg.

Today Kristofer’s account @Swedigger has close to 12,000 followers on Instagram and is one of Sweden’s biggest machine influences. The fact that he was early in posting moving pictures, he believes, is one of the things that made the account grow so quickly.

“Quality is important to me both in my work and on my social accounts. I was early in filming and posting moving material on Instagram, something I think was appreciated. At the same time, I spend a lot of time taking great photos, not just documenting my day but actually trying to make it as neat as I can. It takes a lot of time, but for me it’s a hobby that I really like,” says Kristofer.

Today Kristofer drives a Liebherr 914 compact, and expense has not been spared in terms of extra equipment. Of course, all lighting is from TYRI. In addition, it is lacquered in bright blue so it is difficult not to raise eyebrows when you see it. It looks luxurious, cocky and really raw when it arrives, but with Kristofer at the controls, it’s a precision tool. Therefore, it is obvious for Kristofer to take off his shoes when he enters the cabin and once in there it is tidy and orderly. 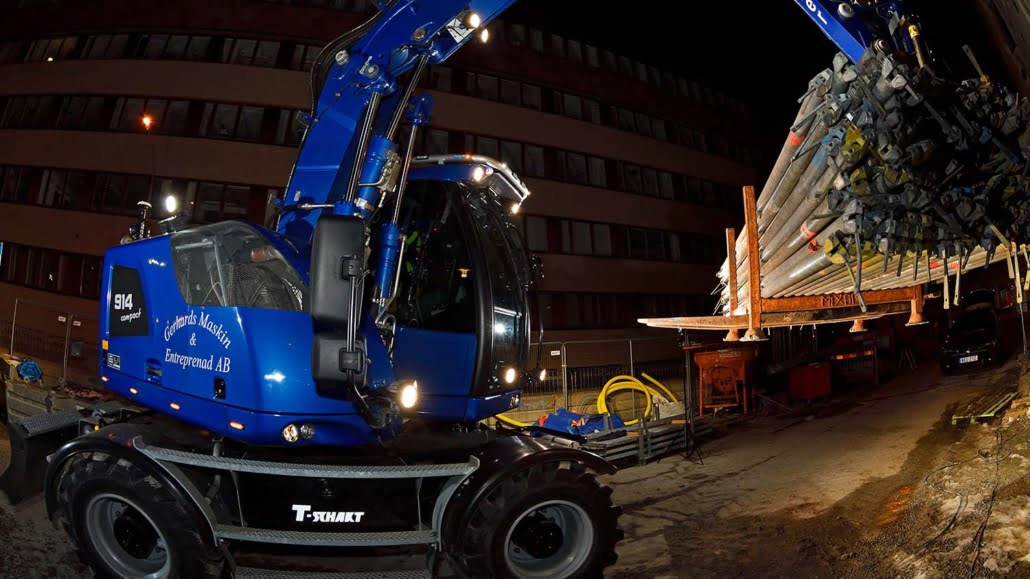 “Of course it should be nice in your workplace. I sit here for many hours every day and then you want to have it as good as possible. The extra equipment is both to increase safety and performance – but of course because it looks nice too.

American-inspired dad who loves all forms of grilling, preferably ribs on the new gas grill. He has a creative streak that makes himself expressive in pictures and film. As a utility car, Kristofer drives a Chevrolet Silverado with 600 hp – also fully equipped and of course with a really hefty TYRI lighting system.

TYRI in innovative collaboration with Swedigger